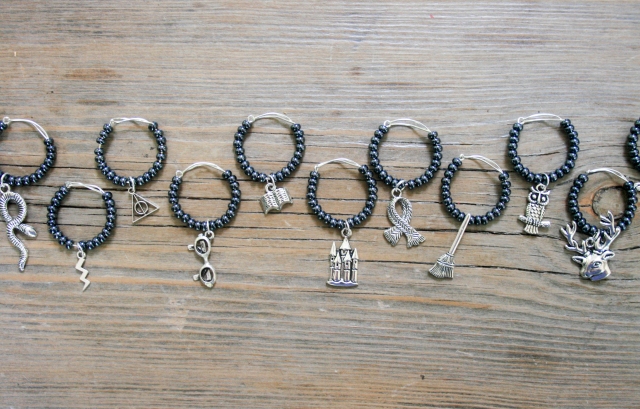 Just recently it was the 20th anniversary of the release of the first Harry Potter book. That blew my mind. Although Harry Potter has been a major part of my life even before I could read, J.K. Rowling’s magical world still feels so fresh and present to me, as if the books came out just yesterday. I don’t even bother pretending I’m not a total Harry Potter geek. Seriously, the intro song still makes me giddy. I remember Christmas when I was six and my mom, in typical Mrs. Weasley fashion, gave my brother and I matching Gryffindor sweaters, I remember dressing up in robes for the book release at our local bookstore, and I remember going to the midnight premieres of the movies in Spanish (we were living in Mexico at the time) and loving them even without understanding them. Everyone should have something that brings out their biggest dopiest smile, like Harry Potter does for me.

So upon realizing that it was the 20th anniversary, I decided it was time to make another Harry Potter craft (check out our sorting hat cupcakes from last year). I’ve combined the wizarding world with one of my other favorite passions: wine nights. These wine charms are super easy to make, the materials are cheap, and I absolutely love them! It’s a subtle way to distinguish your wine glass from others’ and they aren’t so “in your face” Harry Potter so you could get away with saying they are just charms…. shaped like lighting bolts… and broomsticks. I made 12 so I’m keeping half for myself and sending the other half to Michelle. Now that our wine nights will no longer be spent together we’ll have to find new Harry Potter loving friends!

Loop the jump rings onto the charms so that they hang the right way. If you use different charms than I did, just check the angle of the charm’s loop to see if you need them. 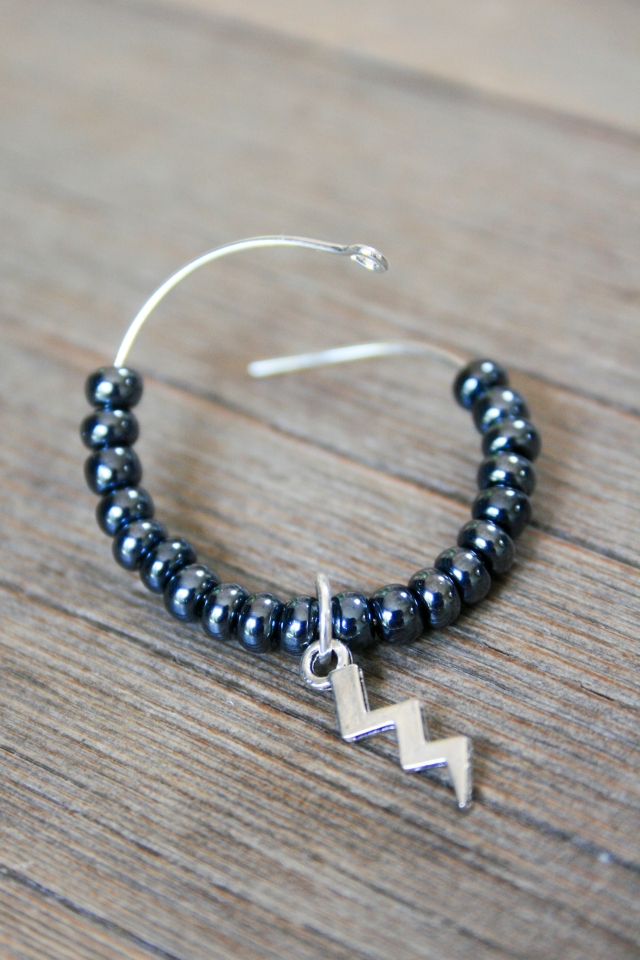 Thread the open ended wire through the loop and bend it back over to hold it in place. Repeat with all of the other charms. Seriously, it is that easy!

As an extra touch, I wrote Harry Potter wine puns (after some serious brainstorming) at the top of parchment colored paper and pinned the final charms to them. 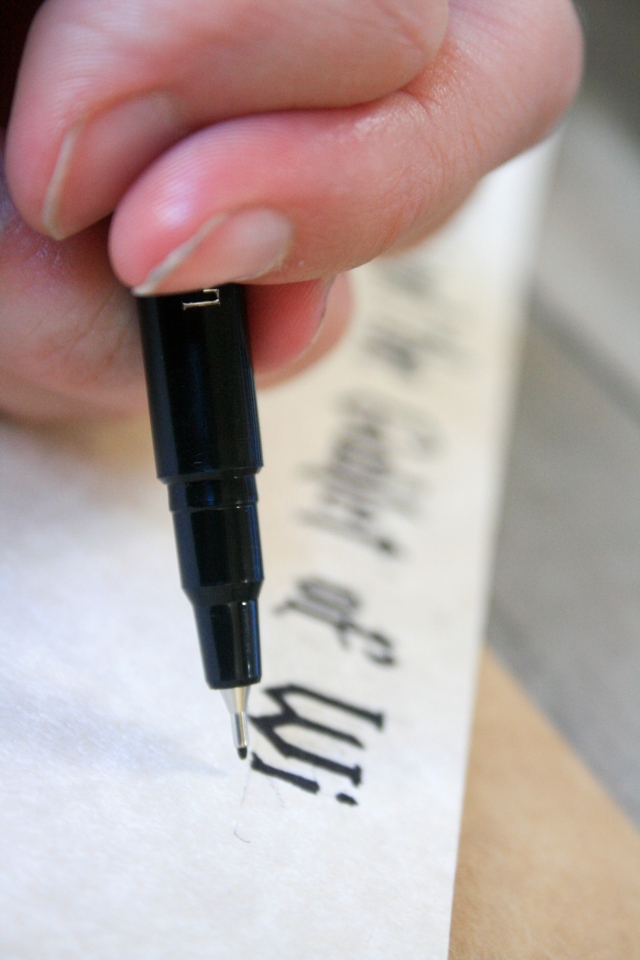 Glue a slightly smaller piece of card stock to the back so that it is sturdier.

I opted for “Harry Potter and the Goblet of Wine” and “It’s not wingardium leviosa, it’s wine-gardium leviosa”. Other ideas are “Sherry Potter” and “Moaning Merlot”. I’d love to hear if you guys can come up with any others! 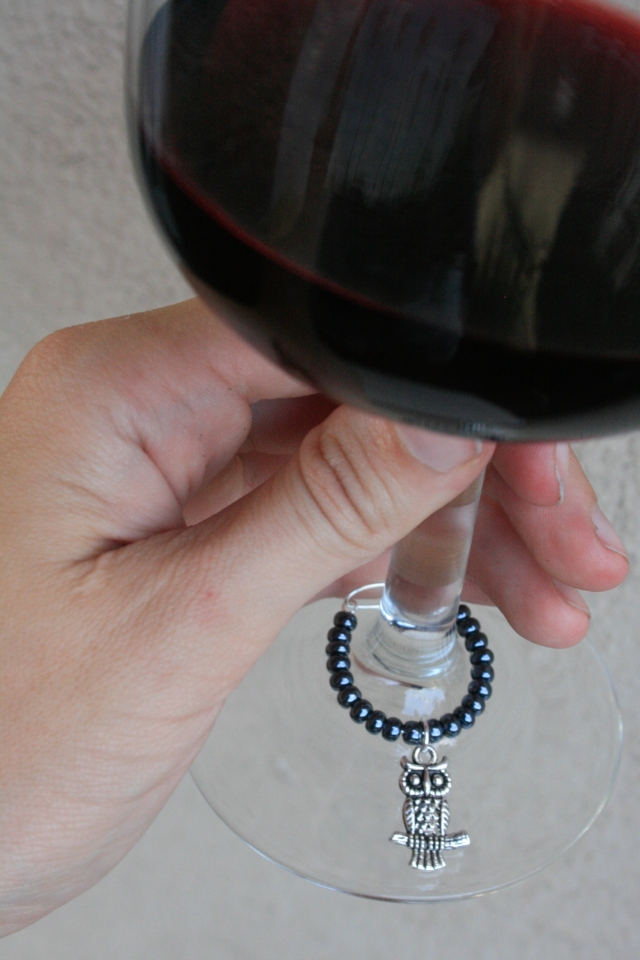 This week was Michelle’s 21st Birthday (woohoo!!) and we all celebrated like we were turning 21 again. We had some friends over for drinks and gifts before heading out to bars in Santa Monica.

As the biggest Harry Potter nerds you’ll meet, we used the occasion as an excuse to make a craft we’ve been excited about for ages. All of our guests bit into these sorting cupcakes to find out which Hogwarts house they belong to. As proud Hufflepuffs in our every day lives, we were reluctant to abandon our yellow for Slytherin, but it was fun to venture into the dark side for a night.

These cupcakes were so easy to make and were a huge hit amongst our friends. To make it even more fun we proceeded to play games throughout the night, scoring house points for our teams. It was a hilarious way to spend a night out with our girlfriends.

As busy college students on a budget, we have no shame admitting that we sometimes make our desserts from a box. These were done with Betty Crocker cake mix and vanilla frosting and were delicious. But, kudos to anyone who makes them from scratch! We’d love to see your versions.

Scoop 2/3 of the white icing into a piping bag (we use large ziplock bags and cut a small hole in the corner) with a star tip. 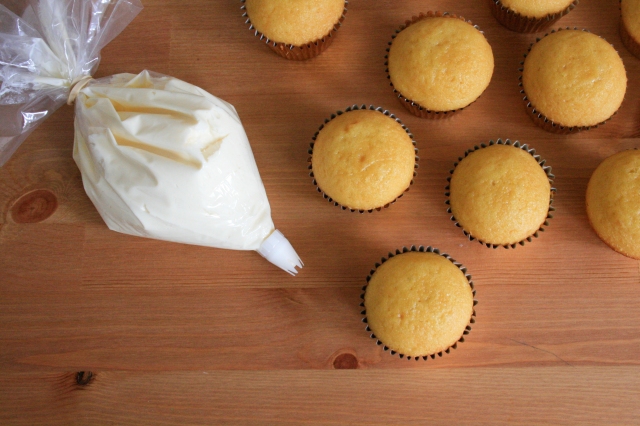 Divide the remaining 1/3 of the icing into four separate bowls and dye them red, yellow, blue, and green. Red dye is particularly tricky to mix, and our secret is to dye it pink first before adding red. It requires less dye and is much faster. Then scoop the four colors into piping bags with normal round tips.

Using a sharp knife, carefully cut a hole in the center of the cupcakes. Only cut 2/3 of the way into the cupcake, careful not to cut all the way through. Save the piece of cupcake that you remove. Divide the cupcakes into four groups for the four houses and pipe the icing into the holes, filling them half way. There should be an equal number of cupcakes for each house. Gently place the removed piece of cupcake back on top, concealing the icing beneath it.

For decoration, create a template of Hogwarts crests (we used Microsoft Word), then print and cut them out. Glue them to toothpicks with a hot glue gun and set aside. 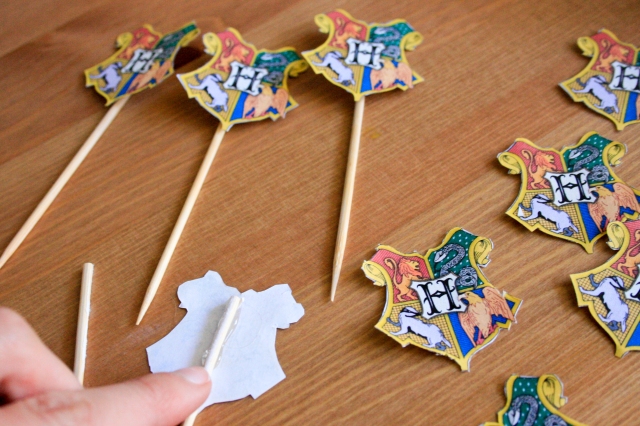 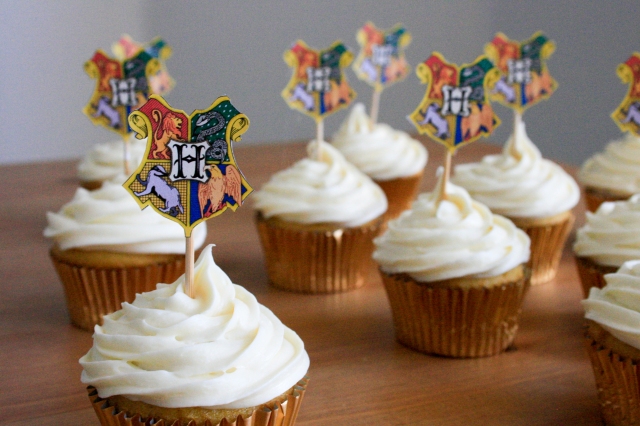 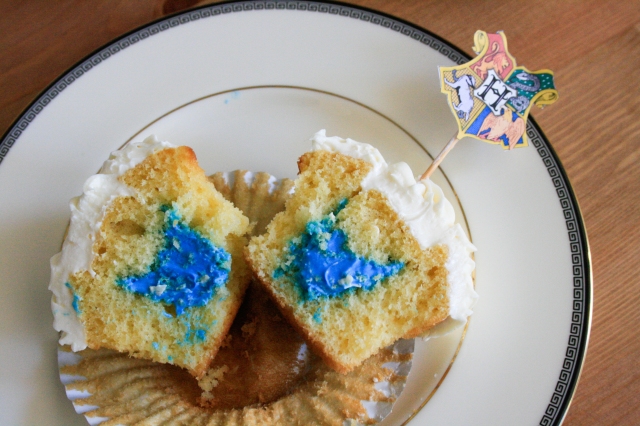